The very first symptoms of pregnancy are linked to hormonal changes in the body, and often serve to protect the mother to be 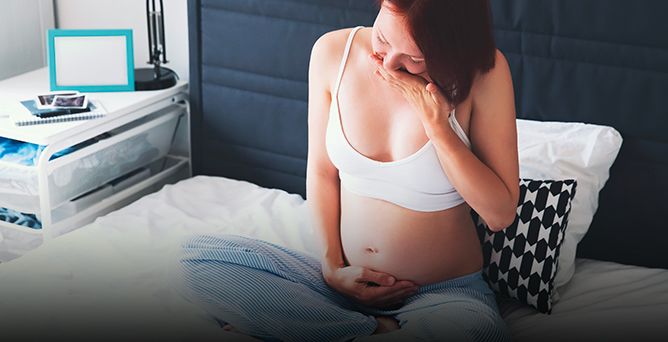 A late period and breast changes

While the definitive answer is provided by a pregnancy test, a late or missed period is the first and most reliable sign of pregnancy. But when do the first symptoms arrive? Some of these may appear immediately after fertilisation of the egg, due to the new balance of hormones in the woman's body: after implantation, the mammary glands begin to grow in preparation for breastfeeding , leading to tenseness in the breast which can sometimes be painful. In addition, the blood supply to the breasts increases, the tissues harden and the nipples become prominent, and change to a darker colour.

Sensibility to odours and flavours: a warning signal for expectant mothers

After conception, many women become particularly sensitive to smells. This phenomenon – which is called pregnancy hyperosmia – is linked to the increase in oestrogen in the body, and serves as a protective mechanism for mother and baby. Indeed, the perception of an unpleasant smell helps to indicate unhealthy environments, harmful foods or behaviours that could be damaging to the foetus. This hypersensitivity to smells is often associated with a bitter taste and the perception of metallic flavour in the mouth – these are also protective phenomena triggered by the increase of oestrogen and progesterone.

Nausea and morning sickness are typical signs of pregnancy, caused by human chorionic gonadotropin (hCG), a hormone produced by the embryo at the beginning of the second week of development. Some women are very sensitive to this hormone, others less so: this is why not everyone experiences the typical symptoms of pregnancy. The early weeks may also be accompanied by fatigue and sometimes even a sense of vertigo, both brought on by a drop in blood pressure.

Swelling and a feeling of tautness in the lower abdomen: the bump beings to grow

Increased progesterone production in pregnancy can cause constipation and a feeling of swelling in the abdomen. As the uterus grows, the lower abdomen may also begin to feel taut. Expectant mothers often feel a tearing sensation in the groin – this is due to the loosening of the ligaments in this area, caused by the hormonal changes in the body, a sign that it is beginning to adapt to accommodate the growing bump.